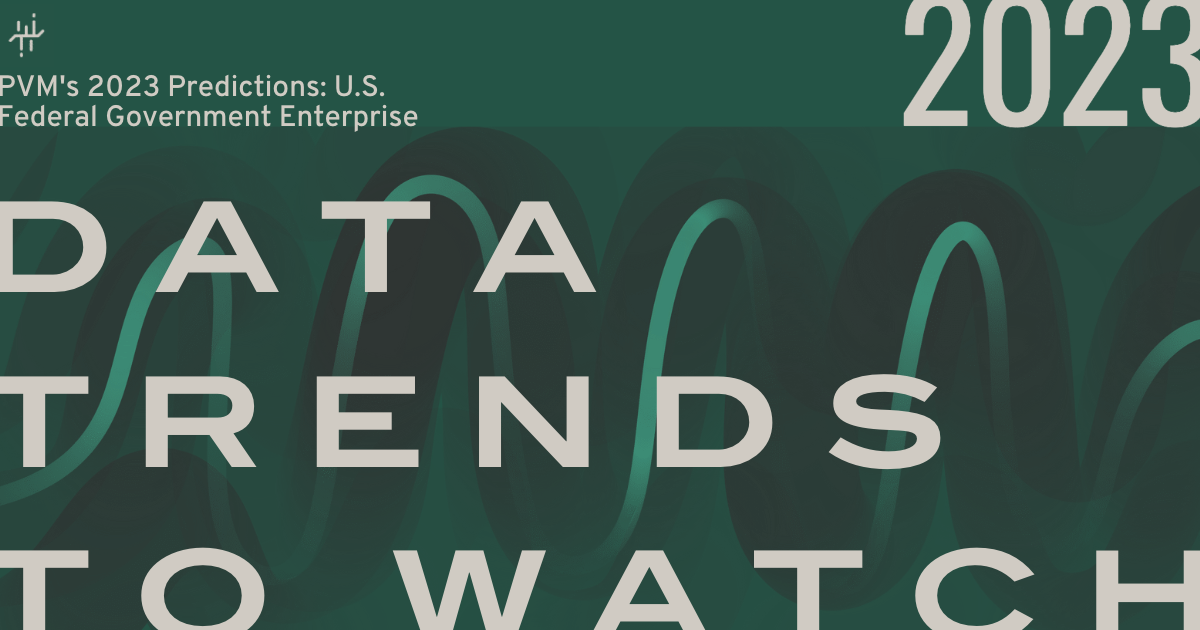 Every organization across the U.S. federal government generates massive amounts of data, and in recent years, the government has successfully laid the foundations to put that data to use — today most government agencies now have the right infrastructure, tools and platforms that they need for effective data management.

In 2023, PVM predicts that agencies will now begin to shift their focus from collecting and managing information to finding ways to extract the most value out of that data. Specifically, they will pursue initiatives that allow them to improve decision making and analysis, with a focus on finding ways to better serve their constituents. This shift could make a widespread difference in the communities government agencies serve across the country — by 2024, it is expected that at least 60% of the government’s investments in artificial intelligence and data analytics will have a goal of improving decision-making and outcomes. 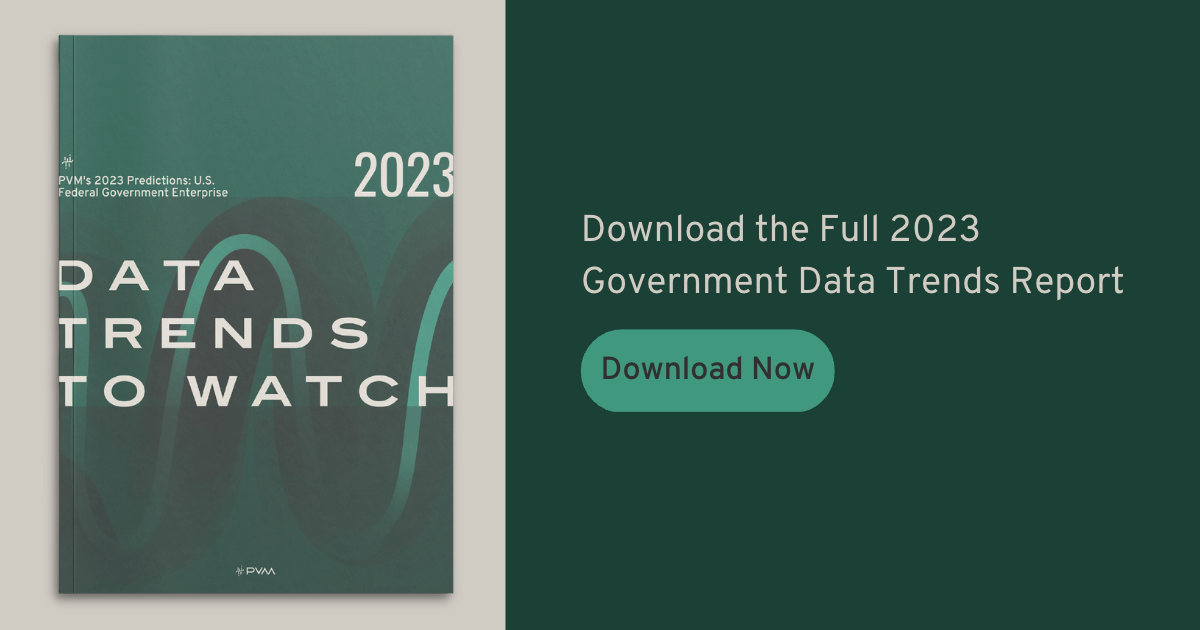 So how does the government get to a point where it can leverage all its data to its fullest potential? There are four major federal enterprise data trends PVM predicts will take center stage in 2023: democratizing data, leveraging external systems, continued movement to the cloud, and artificial intelligence and machine learning for all.

One of the most important trends in government data in 2023 will be the continued democratization and sharing of data. Now that the government has laid the foundations and begun collecting data, it has an opportunity to analyze and optimize the structure of its systems. In many cases up to this point, teams across government agencies have been focused on building the data infrastructure they needed to complete a specific project, which has resulted in many data silos and unconnected systems.

While building these independent systems and processes has helped propel initiatives forward, agencies can get better use out of the data when it is in a consolidated repository that multiple teams can reference. In 2023, PVM predicts there will be many new and continued initiatives across the federal government to combine data into one system so teams can share information, uncover actionable insights, and make better, data-driven decisions.

In many cases, the federal government historically has preferred to build its own systems and IT infrastructure instead of purchasing external platforms. While building software and platforms can provide government teams with more control, it can also be expensive and time-consuming to not only create but also maintain these programs. In recent years, we have begun to see a shift away from this model, with some government teams realizing building everything from scratch was getting in the way of programs and projects that help them accomplish their missions. Now, agencies are beginning to realize the value of purchasing and using software programs that already exist as viable, functional options instead of spending their time building them.

In 2023, we expect to see more teams begin leveraging external commercial IT systems and consolidating their data into these platforms, which in many cases, agencies already own but are underutilizing. As a result, the federal government will begin to free up time and resources—spending less time on supporting homegrown systems and instead figuring out how to get more value out of their data using these external systems that are built specifically for that purpose.

3. Continued Migration to the Cloud

In 2010, the executive branch introduced a shift to a “cloud first” policy for the federal government in its plan to reform federal IT management. Since then, the government has enacted more orders and acts that enable and encourage agencies to modernize their IT infrastructure and successfully move to the cloud. In recent years, cloud use has grown exponentially – in 2022, federal government spend on cloud was expected to reach $11 billion, a whopping 67% increase compared to 2020 spending.

There are so many benefits for the government when it comes to shifting from on-premises data centers to cloud computing, including: reduced IT costs, easier scalability, increased flexibility, and more time to focus on their mission.

On top of all of that, migrating to the cloud can help the government scale its data systems exponentially. Now that government agencies have the data infrastructure in place as we discussed earlier, the IT industry, including companies like Amazon and Microsoft, can provide the right environment to allow teams to grow their data programs to the size they need to operate effectively.

In 2023, we expect the government will continue to put time and resources toward cloud migration as more agencies realize that the cloud can enable them to achieve their goals and better leverage the data they have worked so hard to collect.

4. Artificial Intelligence and Machine Learning for All

In 2019, the White House issued an executive order that included a plan for federal agencies to better use artificial intelligence (AI) technologies. While artificial intelligence and machine learning (ML) have made inroads into many government programs and systems, these technologies won’t reach their true potential if they are only being used by data scientists or other technical members of the federal government.

In 2023, we predict that there will be increased focus on getting advanced technologies like AI in the hands of more government employees to support them in their daily jobs. This shift will be enabled by the three other trends we’ve discussed – the successful democratization of data, strategic use of external systems and cloud migration.

To begin using AI and ML effectively, agencies will have to focus on using these technologies “on the edge,” meaning processing data on mobile devices or smaller computers instead of only on sophisticated back-end systems and large data centers.

When government agencies begin enabling more federal workers to use AI to power their jobs, it could have a big impact. For example, in a public health setting, an epidemiologist could use AI while they’re in their lab to help with analysis on the spot, or another employee could use it on their phone while collecting data at a farm related to disease outbreak. As a result of trending toward using AI on the edge, the federal government will be in a much better position to support its mission and better maximize the value of its data.

Over the years, the government has built the infrastructure to begin to extract real value out of its data. Now, agencies have the chance to focus on the features and functionality of their systems to begin leveraging that data to its full potential. In 2023, if the federal government succeeds in democratizing data, leveraging more external systems, continuing cloud migration, and enabling more of their teams to use AI and ML, it will begin to truly unlock the value of its data for good.