As a GovTech CEO, I encounter one misconception almost daily: “military recruits are less educated than their peers.” This statement is not true — in reality, more than 90% of recruits hold a high school diploma (compared to 75% of their peers), and nearly two-thirds of recruits score in the top half of the United States in math and verbal aptitude. Unfortunately, this myth has spawned several additional misconceptions about related industries, including GovTech.

My Journey to GovTech

GovTech, as defined by the World Bank, is a technology-based “government approach to public sector modernization.” GovTech has become an umbrella term for technology-based solutions (and the companies behind them) that power the technical aspects of digital transformation where citizens are the customers.

As I have shared before, I grew up poor in riches but absolutely enriched with the love of family. As I explored the options available to me leaving high school, it was important to me that I give back and serve the community that had enveloped me with love and support. This desire led me to join the world’s finest Navy.

In the early days of my military career, my contemporaries in the civilian world would ask: “Why are you throwing your life away?”, “When are you going to get a real job?”, and “You are so bright, you didn’t have to join the Navy.” These questions were rooted in a belief that the military was somehow less than the other available professions.

I’d like to set the record straight – again. No organization anywhere on this planet has a more intelligent, impactful, selfless and determined workforce than the United States military. Over the course of nearly 25 years, I have worked with Rhodes Scholars, Harvard Fellows, world class athletes and titans of industry. My peers in the military are now C-suite executives at Fortune 100 companies and leaders in government. In fact, data from LinkedIn shows that there are more than 180,000 veterans listed as holding jobs at the executive level.

Like my peers, I have a strong desire to serve the country that has given me so much. So, when my time in uniform came to an end, I founded a company aligned with my passion to serve.

Over the last 12 years in GovTech, I’ve had to push back on myths similar to the ones that surround uniformed service: The myth that jobs in GovTech don’t pay well. 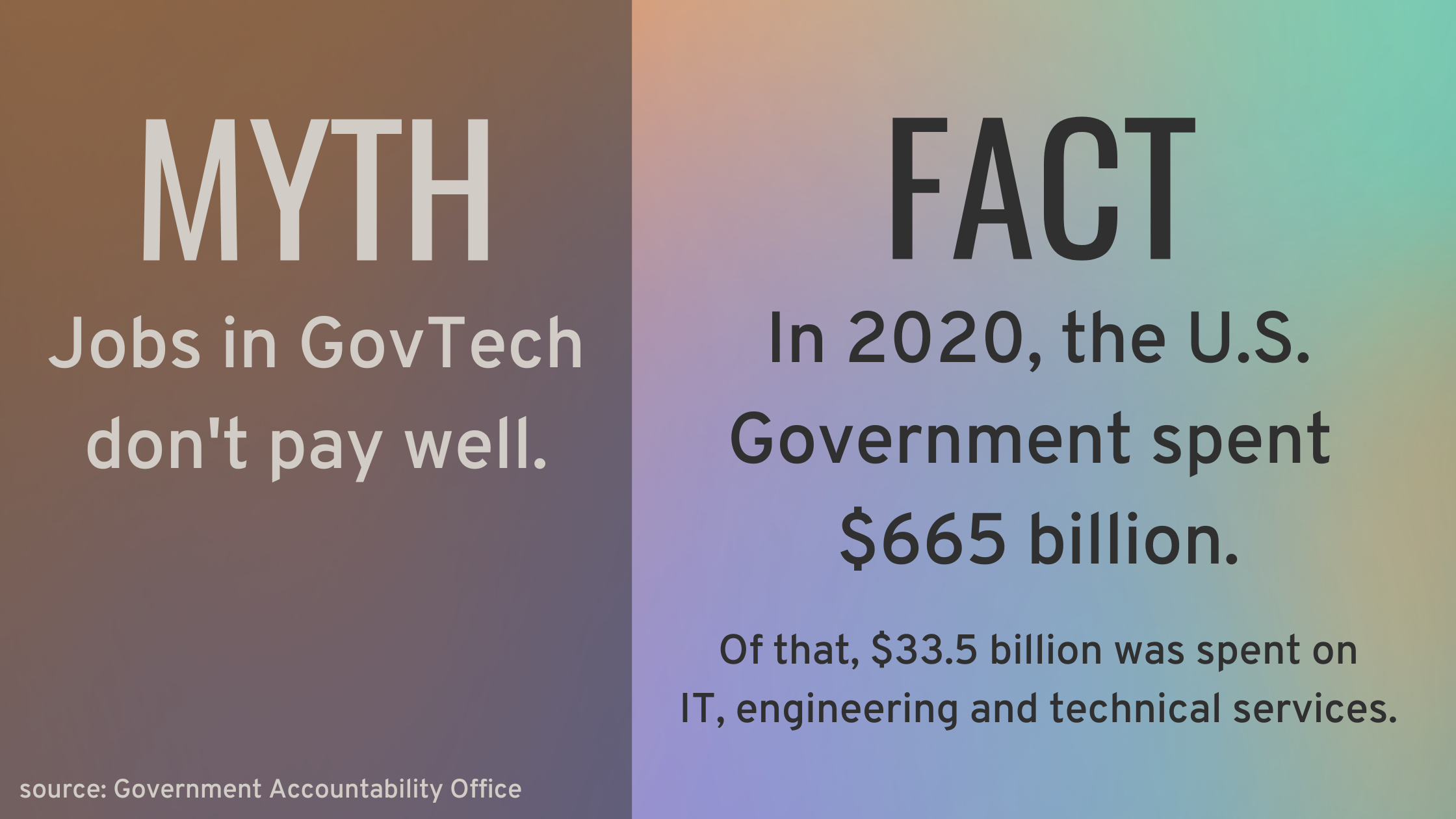 Of the $665 Billion the U.S. Government spent last year, $33.5 billion went into IT, engineering and technical services, specifically:

Since our founding, PVM has been awarded GovTech contracts with amazing public sector organizations, including:

At PVM, our team of professional engineers work on some of the most challenging and impactful problems in IT and are compensated to reflect those contributions. PVM IT is not a non-profit organization.

In the fall of last year, PVM was accepted into AWS’s Think Big for Small Business partner development plan. This AWS incubator of sorts is focused on GovTech small business. The objective of the program is to fill the need for small GovTech firms. A recent Business Insider article reports that Amazon’s cloud-solutions architects make between $90,800 and $185,000, and Facebook’s data analysts make between $111,000 and $160,000. The salaries are completely aligned with salaries in GovTech — plus jobs in our sector come with the added benefit of working on projects that save lives.

I’ll end by saying, I’ve been exceptionally fortunate to have had the ability to work in public service for nearly 35 years now. At no time have I felt as though I wasn’t working with the very best our country has to offer in terms of people and purpose. The sentiment is as true today as it was when I raised my hand at 17 years of age. Join us in GovTech — you will not be disappointed.

PVM Partnering with Foundation for A Healthy St. Petersburg As Technical Advisor To Advance Equity