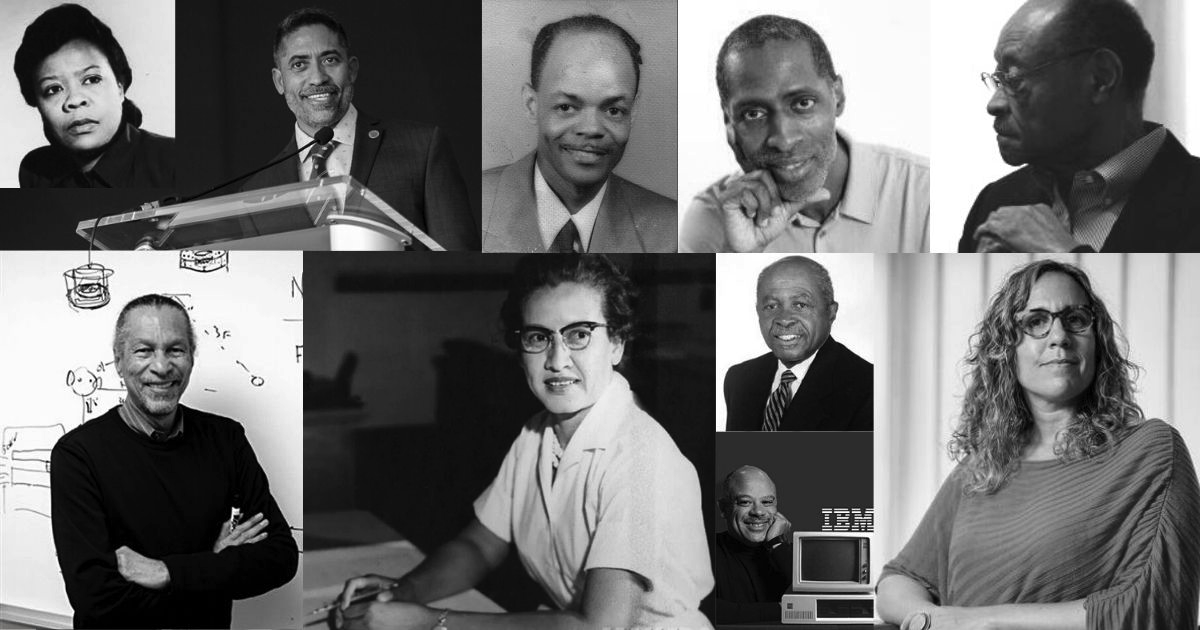 We’ve written about the advantages of a diverse workforce before. But the tech industry overall has a notorious and alarmingly persistent diversity problem. One 2019 survey suggested that as little as 5% of Silicon Valley consists of Black, Hispanic, and Indigenous workers combined. But we can be certain that it is not for lack of interest in technology among students of color; the recruitment pool in the industry is, in fact, diverse, and according to a study by UMass, those firms that make a point to reach those otherwise untapped talent pools—especially at the management and executive levels—are able to easily diversify.

And so, in honor of Black History Month and in the interest of showcasing the wealth of Black expertise in our field, we decided to make a list of the Top Ten Black Tech Innovators: people whose contributions helped shape the world we’re all living in today. And in researching for this blog, we found that there were so, so, so many to choose from. Seriously—so many. The hardest part wasn’t finding them, it was narrowing the list down to only ten!

And so, without further ado:

The Physics of Spaceflight

We’re starting this list by shooting for the stars with Katherine Johnson, whose distinguished career at NASA was the subject of the 2016 award-winning drama, Hidden Figures. A math prodigy from a young age, she was among the first three students to integrate into the public university system in West Virginia in the 1930s. By the 1950s, she was performing trajectory analyses and coauthoring flight research reports for NASA. In 1962, she verified by hand the computer calculations that controlled John Glenn’s orbital flight; indeed, Johnson’s life story serves as a reminder that computers derive their name from the professionals who worked out mathematical equations on paper in the era before modern electronics—a job that was usually performed by women.

After acquiring his bachelor’s at Fisk University, Boykin started his career testing automatic aircraft controls in the 1940s, but before long he decided to found his own company, Boykin-Fruth, Inc. He attempted to get his graduate degree from the Illinois Institute of Technology but had to drop out due to his family’s financial troubles. Even so, he continued actively researching the budding field of electronics and working on his own inventions. He primarily iterated on resistors: a tech component designed to mitigate the flow of electricity such that the tech’s needs are met without being overloaded. His resistors grew more precise and more inexpensive and easy to produce over time, until they became critical units for consumer-market computers and eventually pacemakers.

Marie Brown was a hard-working nurse living in Queens, New York in a time when the crime rate there was very high and police response times were slow. In response to this, she installed three peepholes at different heights on her front door and a camera that could switch between them. The footage was shown on a monitor that could be placed anywhere in the house, and there was even a two-way speaker to communicate with people at the door as well as a panic button to notify the police of an intruder. This system was patented in 1966 and spawned the entire home security industry as we know it today.

This man is considered the Godfather of Silicon Valley for good reason. After growing up in the Jim Crow South, Clay got his bachelor's degree in Mathematics but was turned away in job interviews for explicitly discriminatory reasons. Still, by the 1950s he was writing software for the United States Department of Energy measuring nuclear radiation. This caught the attention of Hewlett-Packard, who hired him in the 1960s to write the software for their first computer, the HP 2116A. After serving a critical management role in HP’s meteoric rise, he went on to found his own company in 1977, Rod-L Electronics, which made electrical safety testing equipment. Among many other accolades, Clay was inducted into the Silicon Valley Engineering Council Hall of Fame in 2003.

James West began his auspicious sound engineering career by tinkering with an old radio until he electrocuted himself at the age of 10. As an adult, he co-invented the foil electret microphone. Previous microphones were not sensitive enough to pick up the same small details that a human ear can, and part of the problem was that the technology that powered microphones was too clunky and too powerful. West solved this problem with a polymer foil that could store battery power in the form of static electricity, which had a gentler touch, among other technological advantages. This invention so revolutionized our ability to record things that over 90% of microphones in use today, such as the ones in cell phones and hearing aids, are based on West’s technology.

A civil rights protester. A venture capitalist. An Electronics Officer for the United States Air Force and National Security Agency. A business executive. A professor. What didn’t he do? Frank Greene received his Ph.D. in Electrical Engineering in 1970 and was the first Black man to be named a trustee at Santa Clara University. He spent his career on numerous computer technology advancements, perhaps most notably the Fairchild Semiconductor, which was the fastest computer chip design at the time. In the 1990s, he focused his venture capitalism on investing in women- and minority-owned businesses. He’s received awards from Purdue University, Washington University, Santa Clara University, and the Silicon Valley Engineering Hall of Fame, to name only a few.

Mark Dean appears on every list of Black tech innovators; his contributions are indisputable. A straight-A student who then went straight to IBM, Dean developed the Industry Standard Architecture bus, which facilitated plugging printers and disk drives directly into computers. He then went on to develop the color PC monitor and the first gigahertz chip. Out of IBM’s original nine patents, Dean holds three. He is an IBM Fellow, held the Black Engineer of the Year President’s Award, has a place in the National Inventors Hall of Fame, and membership in the National Academy of Engineers.

Thompson acquired his Bachelor’s in Computer Science and Visual Arts from MIT and taught himself numerous computing languages such as FORTRAN, PLI, COBOL, and JCL. He began work at Marcomedia as a chief scientist, where he applied a language of his own invention: Lingo programming. This scripting language was specifically designed with the rendering of visuals in mind, making it an ideal tool for multimedia graphic designers and other artists working with tech. Using Lingo, he developed Macromedia Director—better known later as Adobe Director—which had the ability to consolidate different image file formats (such as JPEG and PNG), and was a popular tool during the golden age of adventure games.

Born and raised in Barbados, Alan Emtage attended the graduate program at McGill University in Montreal and became a systems administrator in their IT department. It was in this role that he identified a need to quickly find and pull information from the then-emerging internet; at the time, the process was time-consuming and involved laboriously digging around in servers. So, he wrote a program to do that digging for him, which he called “ARCHIE” (short for “archive”). This was the world’s first internet search engine, and the foundation on which all subsequent search engines, like AskJeeves, Google, Yahoo, and Bing, were built. Emtage went on to participate in the establishment of the URL standard and has served on advisory panels for the National Science Foundation and the Library of Congress

aised by a Jewish father from Poland and a Black mother from the Caribbean, Gelobter studied artificial intelligence and machine learning at Brown University. She then worked on Shockwave, the multimedia platform used by Hulu and many video games. She took on the role of Chief Digital Officer for BET Networks and played an integral role in many internet video technologies, including Brightcove, Joost, and FeedRoom. She even generated the animation that would later be used as a basis for the invention of .GIF files!

It’s clear that while the technology sector may be sorely lacking in Black representation, the world is not at all lacking for Black talent. The bottom line is that without the indispensable achievements of Black and brown scientists working in IT in the last century, our gadgets just wouldn’t be as powerful, as precise, or as practical as they are today.

No one understands this like PVM. We know that diversity in our family is one of our most valuable assets. We invite people of all stripes to find their careers with us. We’re working with the St. Petersburg Innovation District and the Maritime and Defense Technology Hub to further the interests of underrepresented young people in the community with tech internships and mentoring. The next great Black innovator could be you, and we want to help make that happen! Apply today. Happy Black History Month!